Do you need a project manager or a project facilitator? 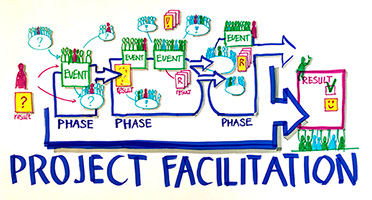 Identifying the right roles is key to the succes of any project. In our work we often see projects that would have been more effective if they had been facilitated and not (only) managed.

A project facilitator brings the skills of facilitation to the work of managing projects. Above all they bring the critical facilitator perspective of independence and neutrality:

For a project owner, project facilitation offers you a clear focus on the project processes – working back from the outcomes to structure a process and engage stakeholders. It enables sharper decision making because one person holds back from taking a view and instead ensures that decisions are based on clear criteria and enables all views to be heard. This increases buy in among project team members and encourages them to take responsibility for delivery.

Project facilitation offers a process map rather than, or together with, a project plan placing as much emphasis on how tasks are achieved as on the tasks themselves. For a facilitator, project facilitation builds from the approach to a single event or activity to the creation of a full project process, with linked synchronous and asynchronous activities.

When should you consider working with a project facilitator? We would suggest –

When the aim of the project is to (re-)structure information or to deliver a design or other tangible outcome, a project manager may fit the bill. When the result to be achieved is intangible and emergent, and the way to get to the results has to be found within the project, then a facilitator may be the right choice. At a time when many organisations find that project management is overwhelming their ability to deliver effectively, project facilitation can help build buy in through a lighter touch.

We commissioned work on a new mission / vision. It was crucial to involve all stakeholders and reach an AGREED text with them. The project lead did not contribute to the text, but rather facilitated the path to agreement. So the key feature was not finding the right text, but finding the right process.